A. and N. recently commented that one of my recipes was tongue-numbingly spicy! I hadn’t taken into account my tolerance for chilies, and had assumed giving a range, between say 1-2 chilies in a recipe, would be a sufficient warning. The fiery heat in a spicy dish comes from both the number of chilies added and the type of chili used.

Chilies are available most commonly in red and green colors – the red chili is spicier than green, while the darker green varieties are hotter than the paler ones. The Scoville scale, which measures for the pungency in both chilies and other spicy food, can only serve as a guideline. For example, Carolina Reaper is now the hottest chili pepper available pushing bhut or ghost pepper down the scale; bhut when I was growing up was the hottest chili known and those who ate it were looked on with hushed admiration. Serrano, which I use, is three-quarters way down the chart, but obviously is still too hot for A. and N.

Heat receptors on our tongue feel the chili burn, and people with more heat receptors are more sensitive. A compound found in a chili called capsaicin is responsible for the burn or chili heat. As you build up a tolerance to spicy food (by eating more because you enjoy the kick), these receptors become less responsive. Why bother suffering to build up a tolerance? Chilies have anti-oxidant properties and provide vitamin C – roughly six oranges’ worth in one chili. The other advantage of eating spicy hot food (especially prevalent during these summer months!) is that the chilies cool you down more effectively. Chili heat increases blood circulation and metabolism, which increases perspiration – releasing heat and cooling down the body naturally.

Following some basic precautions, spicing up food with chilies is adding yet another flavor enhancer to a meal. 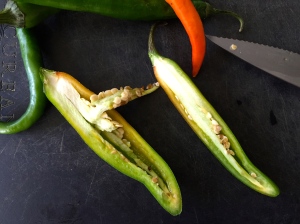 How To Tone Down A Spicy Dish:

Whether it is food remaining from a tailgate party or from the holidays, I enjoy having leftovers. However after a day or two in the refrigerator, those meals start to look uninspiring. Recently I borrowed a technique that is used in many cuisines to freshen my chili leftovers.

I stuffed the remaining chili into bell peppers and wrapped some with cabbage leaves, which introduced both color and variety into the next few meals. Dolma is a term commonly used for stuffing and wrapping a vegetable. The vegetables used for stuffing meat, dried fruits and nuts, grains, and lentils are usually bell peppers, eggplant, and tomatoes. Common wrappers are cabbage or grape or vine leaves. Whether a dolma is filled with vegetables and called a leaf dolma or one that is predominantly meat and called a meat dolma, the dish combines many spice flavors and textures. 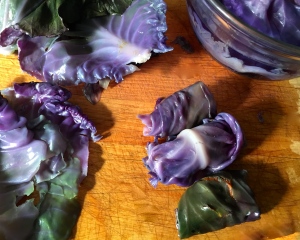 As my two-day old, lackluster chili looked attractive again in these vegetable vehicles, I was motivated to try out a version of more traditional eggplant dolma.