I confess that I am a coffee addict, and I hold family genes responsible for my chicory-flavored coffee cravings. Chicory is a root that adds the noticeable tang to medium roasted South Indian coffee. A member of the dandelion-family, the root was once used to stretch coffee rations in Asia and Europe. South Indians continue to mix chicory with coffee beans for the distinctive peppery flavor that it provides, but I’ve also ordered a cup of the blend in cafes in New Orleans. When coffee and milk are frothed together, the foam brings to the forefront both the aroma and flavor of chicory.

Long before machines gurgled and hissed out steaming milk, a frothy cup of coffee was achieved simply. All that is required are two separate tumblers, one with fresh filtered coffee and another with hot milk (often mixed with sugar). The hot milk is directly poured into the brewed coffee, starting with the vessels two inches apart and deftly raising one of the tumblers up to and approximately an arms’ length height. This introduces aeration and forms the distinctive top layer of bubbles. This method of producing a foamy cup is still practiced in everyday tea and coffee houses all over India.

My first attempt at making a chickpea curry was a disaster. At the end of the evening, my aunt gently reminded me to pre-soak the beans before cooking them. Ever since that rock-hard-chickpea incident, I’ve resorted to using canned cooked chickpeas, and generating a lot of discarded liquid in the process. Until now. Aquafaba, the residual liquor from cooking chickpeas, works perfectly as an egg substitute – a boon to those with an egg allergy or a vegan with a sweet tooth.

Aquafaba, from the Latin aqua (water) and faba (bean), is a more attractive name to give the liquid from a legume. This viscous amber-colored liquid is rich in starch and protein plant material that is drawn out from the legume during cooking. Aquafaba whisks into a binding agent for use in cakes or froths up as foam in drinks. Its neutral flavor doesn’t compete with other ingredients when substituted for eggs in mayonnaise or meringue. Goose Wohlt, an American software engineer, is widely recognized as the person responsible for both the name and making the first stable vegan meringue in 2015.

Aquafaba can be made from canned chickpeas. However, using dried chickpeas eliminates the added salt and preservatives found in the canned version.

One of my new favorite drinks is the Peruvian Pisco Sour – but the cocktail was hard to make for a large holiday party. It would have been a challenge to separate so many eggs and keep the egg whites at an optimal temperature. Substituting aquafaba for egg whites addresses these concerns, and is suitable to serve both vegans and worriers (regarding raw eggs) alike. Cheers!

Note: Use the cooked chickpeas to make a simple Italian appetizer with garlic and chili powder, chickpea curry, or process into a smooth hummus.

After printing a successful issue, my first editor in London brought caviar to the office. The team was excited to enjoy this expensive gesture. The black bubbles of cured sturgeon roe glistened from a small glass container, sitting on top of a mound of crushed ice. A delicate mother-of-pearl spoon rested nearby. While everyone savored the refined treat, I seemed to be the only one who didn’t appreciate the caviar’s long aftertaste. However, I changed my mind about caviar this New Year’s Eve.

To ring in the New Year, my neighbor served a delicious appetizer of caviar, crumbled hardboiled egg, and onion on lightly buttered toast. The two additions provided a delicate balance to the texture and salty flavor of caviar, and for the first time, I enjoyed this extravagant food.

A few days later, I saw the holiday episode of The Great American Baking Show that featured champagne “caviar” as a dessert garnish. The “caviar” was easy to make; the golden champagne droplets were teased out from stock items in my pantry such as gelatin, sugar, and oil. I was inspired to create a whimsical twist on the champagne and caviar pairing. I topped the black sturgeon beads and orange salmon roe with the captured champagne “caviar” bubbles, which added a hint of sweetness to this festive and decadent treat.

Another option: Combine the hard-boiled egg with caviar and serve on toasted bread. Top off with champagne caviar.

Note: This luxurious treat can be made a little more affordable by replacing champagne with sparkling wine and /or using locally-farmed roe. Here’s to a year of celebratory meals that don’t break the bank!

This has been a week of celebrations, from Cinco de Mayo and ending this weekend on what is known as two-minute sporting spectacle, the Kentucky Derby. Both celebrations feature great food as well as a signature cocktail. Margarita’s tequila and triple sec and mint julep’s bourbon base combine with simple syrup to make easy-to-down cocktails. Most people are familiar with making (and drinking!) margaritas, but the bourbon-based mint julep is just as easy.

The mint julep is associated with the American South, where a whiskey/bourbon and mint combination that is savored during the long hot months makes this cocktail a perennial favorite. At the Kentucky Derby, the drink is served in a special silver Julep cup. Using a metal container in the heat is practical as the frosted cup insulates the cocktail. A mint julep is easy to make: Use the best bourbon that you have available, fresh mint leaves for both aroma and aromatics, and simple syrup. 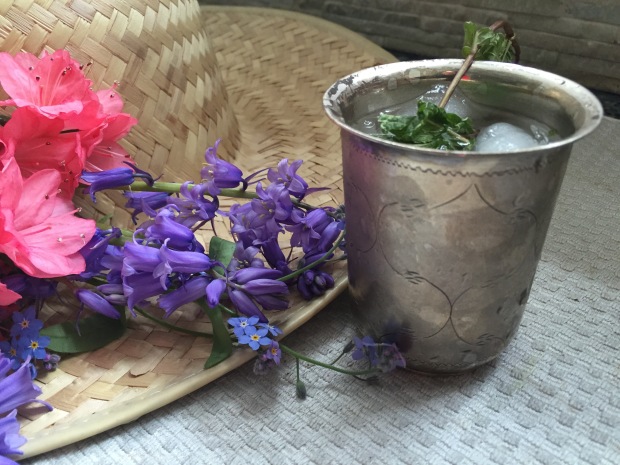 Cheers to the winner!

Note: If you don’t own a metal cup or silver julep, chill a standard highball glass.

Persimmon is a mellow fall fruit, which looks like a cross between an apricot and tomato. The fruit’s color also reflects autumn shades, falling somewhere in between a pale orange and drifting maple red leaves. The two varieties of persimmon, categorized as astringent and non-astringent fruits, are available through December. Their edible skin bruises easily, and once the fruit has ripened, their shelf life hastens.

The rapidly deteriorating condition of the persimmons inspired me to preserve their essence. I remembered my mother’s stewed pineapples and jackfruit, which I savored long after their season. Stewing the persimmons conserve their subtle sweetness. Stewed fruits can be flavored with cinnamon or ginger and they can be used immediately as a spread or frozen and used later. Fresh persimmons can be added to a salad or baked in an open tart. I used the stewed paste to flavor simple syrup. The persimmon syrup became my fall version of a mojito – a persimmoto! 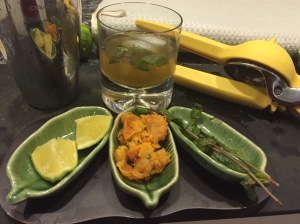 Sipping what was then a novelty in New York City’s Chinatown, my first impression of bubble tea was its resemblance to an ingredient from my childhood. The jelly-like bubbles, resembling frog eggs, came up through the straw along with the perfect amount of sweetened tea. In the Indian drink, falooda, the taste of the black pearl-shaped bubbles is camouflaged by ice cream and rose syrup, but in bubble tea, the texture and taste of larger tapioca pearls are up-front and center.

Tapioca pearls are made from cassava root, and swell up when boiled in water. The swollen pearl has a firm core, and they look very similar to bubbles of eggs in ponds, tucked under leaves and algae. Used in both sweet and savory dishes, tapioca pearls have a teeny bite to the otherwise smooth jelly-like consistency.

Bubble tea, often called pearl tea or Boba tea, started out as a simple concoction of black tea, sweetened milk, and small tapioca pearls. However, it is now available with flavorings of honey, fruit juice, and bigger “boba’ pearls. As A. and N. are more familiar with the modern version of bubble tea, I wanted them to experience the less sweet version.

Tea bags –1-2 (depending on strength)

The next few weeks will be busy, but I look forward to catching up with you in June! If you have any suggestions on what you would like to see covered, please let me know

When the weather report called for blizzard conditions and snow began to amass on patio tables like coconut icing, I decided that it was a good time to make soup. I’ve learned from past snow shoveling seasons to always keep good stock ready at hand and/ ready to thaw. In previous years as A. and N. would layer up in preparation to begin shoveling, I would start cooking a soup before joining them outside.

A soup recipe for a snowstorm should be as easy as combining and simmering roughly chopped vegetables and herbs with stock. The reward upon returning from shoveling is twofold, a cleared path and the warmth of rejuvenating aromatic soup. Before I head out to shovel, I combine chicken stock and red pearl onions to make onion soup.

Pearl (cocktail) onions are walnut-sized purple or white onions that are innately sweet. Pearl onions cook quickly and retain their shape, making them a good substitute for regular onions in soup. One of my pet peeves with onion soup is that if the onion slices aren’t cooked down and caramelized, they retain a slimy texture – one that you can taste in every bite. Caramelizing onions take time and constant attention. The miniature pearl onions sweat (lose moisture) and brown rapidly. A resultant soup has both a pleasing textural crunch as well as the desired caramelized flavor.

Due to the petite size of pearl onions, you need a large quantity for making the onion soup. Peeling 25 onions comes with the perennial problem – tears. I was happy to come across a clever trick to cope with this arduous task. Place the pearl onions in a bowl and heat them in the microwave for 20-25 seconds. Remove them immediately (or sooner if they start to pop), as you don’t want the onions to cook. Cut off the ends of the onions and pull away the outer skin, which should come off very easily. The pearl onions are now ready to be substituted in the classic French Onion soup, which combines onions and garlic in wine and stock. A deliciously simple soup with lots of flavor!

Salt and pepper – to taste

Pearl onions are sharply vinegary in taste, and served in North Indian restaurants as cocktail onions and (when spiced) in South Indian homes as ulli thiyal, a relish. Alternatively called button onions and Silverskin onions, they are usually pickled and used throughout Europe with spring peas, as part of a smorgasbord of pickled herrings and beets, or as a garnish in the gin and vermouth cocktail, Gibson.

Distilled (or any pale-colored) vinegar – ¼ cup